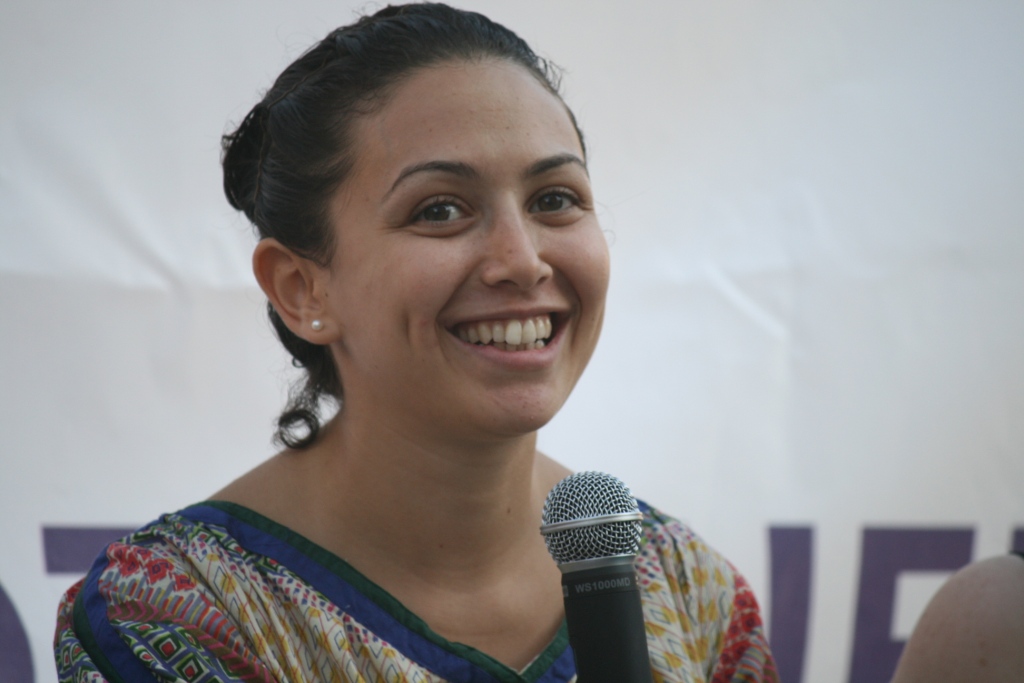 Yara Sallam was imprisoned along with 22 other activists on June 21th  for participating in a demonstration against a new law restricting the right to demonstrate. Since then, She is in prison. She has been sentenced to three years imprisonment. The legal team immediately appealed the verdict and the appeal hearing is scheduled to take place on the 28th of December 2014.

…………………………………………………………………………………………………………..
Dear Yara,
I remember my first visit to Cairo in December 2011 and our meeting. You had been a few months earlier to Madrid to speak in a talk that linked the 15-M with the revolutions of the Arab world and many people had recommended me to meet you in Cairo. After less than 5 minutes talking with you I realized you were the atypical young Arab girl who breaks the stereotypes. Everything you and your colleagues told me that day changed also my mind.

Since then, we have met in different places and I have always felt, while listening to you, that your words, your speech, your way or doing politics and being a political person is like fresh air that  blows old-fashioned leaderships and the magic formulas for Egyptian women designed and planned from experts´ offices.

In a few weeks will mark the four years of the Egyptian revolution that toppled dictator Hosni Mubarak. It seems unbelievable what has happened in these years. Since that January of 2011 I follow closely what has happened in Egypt and have lived with horror the massacres of the population and the violence perpetrated against women in the streets and squares that were once a symbol of hope in the whole world. In defense of the rights of these women, you were awarded one of the most important Human Rights prizes in Africa.

Today I am thinking of you, Yara, as I have done many times since you were arrested. I was thinking about of you last summer while I was walking along a Mediterranean Sea beach, in one of those moments when you feel free and I come to mind people who are not. I thought of you too while participating in demonstrations in favor of the right to abortion, realizing how easy it is to lose basic rights.

Actually, Yara, you are in jail for believing that things should be different and to defend Human Rights and, especially, Women´s ones. Yara, you are in prison because you dare to dream. And as I also dream, I am doing as much as I can to help you to go back to  the streets of Cairo, where your place is. And probably what I do is not enough to get so, but I try it.

And also, I am doing as much as I can to let you know that I think of you a lot and to make you feel my support and the one of thousands of people from all over the world who believe your dreams are important and necessary as well. And we want you to know that people who dream as you do will never be alone.
Sagrario Monedero- Member of the NGO Alianza por la Solidaridad and Promoter #SendLoveEgypWomen campaign

«If you want also to support Yara and encourage her to keep on dreaming, write a letter to her or forward this letter to yara.sallam@gmail.com or yara@eipr.org or write her on Twitter  @YaraSallam with the hashtag #SendLoveEgyptWomen label. We will collect on our website all the cards on Twitter!