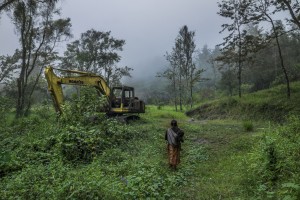 A mayan woman walks beside a bulldozer abandoned by the Spanish company Ecoener in Santa Cruz de Barillas (Guatemala) on November 20, 2014. The arrival of foreign companies to Latin America has provoked abuses of the rights of indigenous people and repression of their defense of the environment. In Santa Cruz de Barillas, Guatemala, the project of the Spanish hydroelectric Ecoener has caused murders, violent riots, the declaration of a state of siege by the army and the imprisonment of a dozen activists opposed to the project. They defend their territory and their river, called Cambalam. The river has for the Mayan people a special meaning and it is linked with their ancestors. A group of Mayan Indians, mostly women, has cut a path and has installed a resistance camp to prevent the enter of the company’s machines. The prosecution has also provoked that some ecologists, with orders for their arrest, have been hidden for months in the Guatemalan jungle.

In Coban, place located also in Guatemala, the hydroelectric Renace has been installed with threats to the population and false promises of development for the area. The company has also forbidden the access to the river for thousands of people and has no respected the close relationship of the Maya Indians with environment. Renace is a Guatemaltecan company but has given the contract of the construction of the hydroelectric to the spanish company Cobra. As in Santa Cruz de Barillas, the project has divided the population and has caused riots. The project has very close families that live in extrem poverty. They are people that leave close to the hydroelectric but they don’ t have electricity at home. ©Calamar2/ Pedro ARMESTRE