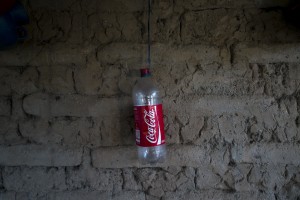 November 08, 2014. Raquel lives in El Bonete (Nejapa, El Salvador) and she doesnÕ t have drinking water at home. She has to go to the wells that are contaminated to get it. The people of Nejapa in El Salvador, have no drinking water because the Coca -Cola company overexploited the aquifer in the area, the most important source of water in this Central American country. This means that the population has to walk for hours to get water from wells and rivers. The problem is that these rivers and wells are contaminated by discharges that makes Coca- Cola and other factories that are installed in the area. The problem can increase: Coca Cola company has expansion plans, something that communities and NGOs want to stop. To make a liter of Coca Cola are needed 2,4 liters of water. ©Calamar2/ Pedro ARMESTRE