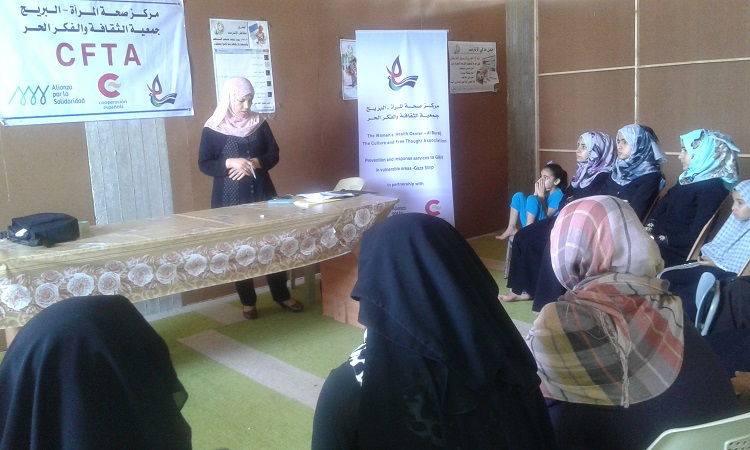 The Culture and Free Thought Association (CFTA) and Alianza por la Solidaridad have decided to unify their knowhow in to strengthen the capacities of Gazan civil society organizations to defend and protect women victims of gender-based violence (GBV) with a strong emphasis on community empowerment1. Starting in January 2016 for two years, this project is cofinanced by the European Instrument for Democracy and Human Rights (EIDHR) programme of the European Union.

Women in Palestine face unacceptable violations regarding their basic rights as citizens. They suffer violence (physical, psychological, economic, sexual and early marriage)2, discrimination and denial of their rights. This situation impedes them to play their social, economic and political role, essential to the development of the Palestinian society as a whole. Despite the endorsement by the Palestinian government of the Convention on the Elimination of All Forms of Discrimination against Women (CEDAW) and the UN Resolution 1325 on the role of women in peace building process, concrete State actions are still weak.  In a context where patriarchal rules govern the position and the role of women and where the protracted Israeli occupation entails a rising in violence against women3, there is a need to take effective measures to protect women form violence and claim for engagement and accountability of the duty-bearers. The national strategy to Combat Violence Against Women for 2011-2019 adopted by the Palestinian government requires concrete commitments (e.g. investigation and prosecution of gender-based violence cases) and resources to become a reality.

In this regard, the role of the civil society is recognized as being crucial to protect women in the Gaza Strip. CFTA has been running the Al Bureij Health Center located in the middle of the Gaza Strip, providing services to women through a multisectoral approach combining medical (Sexual and Reproductive Health), psychosocial and legal support to GBV victims. The Wessal and AMAL Coalitions represent respectively 40 community-based organizations and 11 women’s rights NGOs in the Gaza Strip and play an instrumental role in defending the rights of the women living in the Gaza Strip. ApS is a key player in Palestine acting in favour of a better recognition of GBV issues by the national and international community through several advocacy platforms and linkages with international initiatives such as EveryWomen EveryWhere, an international coalition on violence against women.

Through this project, the partners want to tackle the different facets of the GBV challenges. They aim at a strong popular mobilization, with Community and Women Leaders involved in all stages of the actions, in order to assure ownership and self-sustainability of the action. Enhancing the services and the response to GBV survivors’ needs, influencing the political and legal environment to achieve a more protective Palestinian society for women and launching important communication campaigns to shift the perceptions and attitudes of the population towards women’s rights, are the key objectives pursued by CFTA, ApS and the Wessal and AMAL Coalitions.

“I had a conflict with my husband. I tried with Mukhtars and neighbourhood committees but my husband refused to divorce me. However, I was attending sessions and I knew that I have legal rights, so I brought my mother to attend to”.4

Key achievements by the end of 2018

For the International Women Day on the 8th of March 2016, CFTA and ApS provided visibility to the women’s situations in Palestine and promoted their positive contribution to the Palestinian society through speeches in mosques to engage a dialogue on Women role and their status in Islam, the launching of 10 000 SMS on women’s rights and radio spots reminding the celebration of the Women’s Day and the organisation of recreational activities for women victims of GBV. The results of a survey on the Palestinian public opinion attitudes on women political participation in peacebuilding were also presented5. A hashtag will be launched on the 30th of March to spread the results of the Campaign events.

2 Violence against women in the Gaza Strip, after the Israeli military Operation Protective Edge, 2014, Alianza por la Solidaridad & Action Aid, October 2015: 39.6% of women interviewed in the survey experienced at least one type of domestic violence

3 See the study above for reference: 33% of the women reported having experienced violence before, compared to the 37.7% who reported  it after the war

4 See the study above for reference: testimony from a woman. A Mukhtar is the head of a local government of a town. 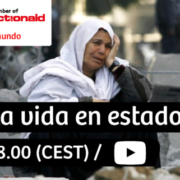